The Victories Will Come 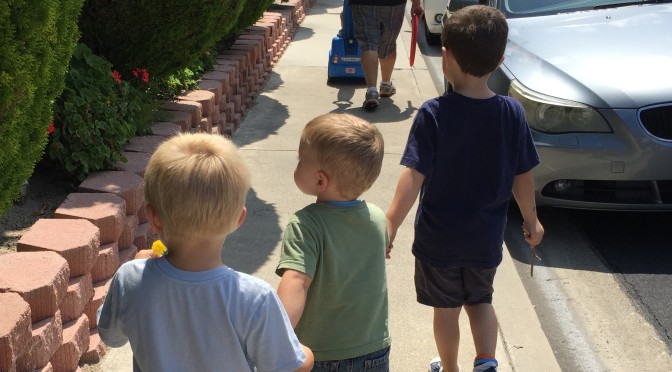 It has almost been one year since my son was diagnosed with Autism.  The diagnosis wasn’t just “Autism”; the doctor nailed the coffin shut with the word: SEVERE.  My world shook to the core when this seemingly static word exploded into the room.  The doctor didn’t even hesitate to drop this heart breaking bomb.  Certainty resounded in her firm voice, as the word “severe” echoed in my swollen brain, but what came next was a glimmer of hope I hold onto every day.  I remember the moment so vividly.

The doctor informs us that this term “severe” is not permanent.  Autism rests on a sliding scale.  Charlie is currently on the severe end of the scale, also known as low functioning.  The illness itself is not severe, but right now, it severely affects his every day life.

“One! One! One!”  the numbers progressively grow louder until turning into an ear piercing, blood curdling scream, jolting me from my fascination with the solitary word: SEVERE.  I oblige my son’s request to count his lined up vehicles as the doctor continues to speak.  Constantly, he screams numbers in our face until we count his cars, perfectly lined up according to his world order.

To me, there is no rhyme or reason why the purple car must be in the middle, and the orange car continually holds its place in first.  To him, it all makes perfect sense, and to change anything, even a minute detail, creates chaos in his world.  Chaos that presents itself in meltdowns, which occur several times an hour.  This is not your average toddler tantrum; his meltdowns include self-injury, kicks and hits to anyone around, and senseless screaming.  These episodes last anywhere from 5 minutes to almost an hour.

Every day I cry.  It takes 2 people to put him in his car seat or change his diaper.  He’s small, but the kicks and head-butts are so fierce.  Add 3 other kids to the mix, ages: 5, 3, and 4 months old.  Laundry and dishes pile high in my once clean home.  Dinner is almost inevitably fast food or some easy Costco premade meal.

Grocery shopping is a full-fledged mission that I always recruit my mom for.  We can usually manage to get him in his car seat if I lay on him while my mom snaps the buckles, but the screaming and body flailing are unnerving.  I’m spent before we even park, my nerves fried and raw.  Armed with my mom, an exit strategy, and LOTS of suckers, the trip is emotionally and physically taxing but somewhat controllable most of the time, if we reside within Charlie’s strict unspoken rules.

Stopping mid-shopping trip is suicide, so we avoid eye contact with strangers and conversation at all costs.  Seemingly rude, we employ these strategies to complete our mission: groceries.  If anyone dare talk to him including a simple, friendly hello, a fit of screaming ensues along with wild hits to the offender.  We strategically move about the store, as deviating from the normal shopping route results in an epic meltdown. 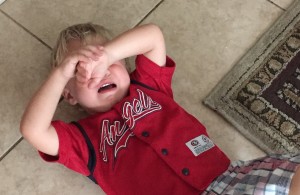 All outings are hard for Charlie.  Picking up my 5 year-old son from school often ends in me carrying him, kicking and screaming, while pushing the baby in the stroller and holding onto a 3 and 5 year old.  Every day he throws toys at his brothers’ heads, kicks, and/or hits them.  It all breaks my heart.  I do NOT know what to do.  I’m not a bad mom, but I have no control of my son.  My husband and I parent him exactly like his brothers, but the pulls of Autism are stronger than any punishment or reinforcement we can offer at this point.

Our hardships continue to circle through my head until I’m pulled back into the conversation by the doctor’s prying questions.  My thoughts on life with my son jump to the background as I continue with the list of struggles for my tiny 2 ½ year old.  “Daily, I clean poop from his clothes, walls, and his room.  He has constant diarrhea because he only eats beige foods: apples, yogurt, Cheerios, and chicken nuggets.  He refuses to use plates and utensils.  He wakes up around 2 a.m. a few nights a week, screaming and thrashing for hours, but won’t let us touch or hold him.” 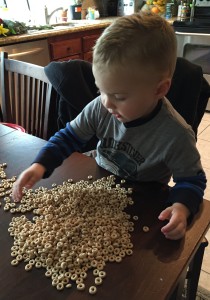 A sense of relief, sadness, and embarrassment come over me as I share Charlie’s daily issues with the doctor.  I want to tell her how I feel like I’m failing my son and how my heart aches, as he ignores me so much of the time.  How he’s never called me mom and won’t hug me, but I stick to the facts and continue sharing my pre-typed list of concerns.

This was almost a year ago.  Life was so hard.  Looking back, I don’t know how we functioned, but God equipped up.  We survived a season of life that I don’t wish on anyone. After a long year of tears, laughter, joy, heartache and copious amounts of hard work, he has come so far!

Meltdowns rear their ugly head about once every other day or so, not hourly.  Grocery trips are mostly manageable; he even climbs in his car seat by himself.  Through feeding therapy, he now regularly eats a variety of foods and uses utensils.  He plays with toys instead of inspecting their intricacies for hours.  He understands and follows simple directions, and he is connecting with us in new ways!  The list of victories goes on.

Charlie still struggles with day to day life, but he has made huge strides!  Life is now enjoyable; he is happy and learning to cope.  The road we are traveling is not easy.  I have wanted to give up so many times, but God keeps me going.  I often doubted that the victories would come, but I know now that the work we put in will continue to change our son’s life for the better.

With that, I urge you to dig deep and push your child to achieve great things.  It will happen!  The victories will come!  His or her achievements might not be what you expect, but look closely, the victories are there.  Some will be small and seem menial, but they will add up.

Hopefully, in a year’s time or less, you can look back on this winding journey and be overjoyed to find the victories have arrived, whether you saw them or not.  Charlie is still very behind, but he has grown more in this past year than all his therapists and doctors expected, more than I ever wished for.  We will continue to press on and let the victories pile up.  I urge you to do the same.  One victory at a time!