* I am not a professional.  I am sharing strategies that work for us.*

We do our best to replace Charlie’s Autistic behaviors with socially acceptable and functional activities.  As we do this, we always keep in mind the need he is trying to satisfying.  Think of it as someone on a diet.  They are craving crunchy foods, so they may replace chips with carrots.  The carrots provide the desired crunch while helping the diet stay on track.  We are replacing behaviors that are not appropriate with something that is more acceptable while satisfying his needs.

There is much controversy over eliminating “Autistic behaviors”.  I have heard people explain it as breaking the child and their natural tendencies.  This is not true.  ALL children have natural tendencies.  Some are great, but others can be dangerous, mischievous, and disobedient.  It is our job as parents to raise our children to be socially competent, functional contributors to society.  We are the molders and shapers of their little lives.

Below are some common issues and some possible solutions.  If these don’t work for your child, try something else.  Don’t give up.  It will take time, but you will find success, all while teaching your child coping mechanisms for their current and future needs.

1. My child spins in a circle.

We satisfy the need to spin with a Sit ‘N Spin as well as play “Ring Around the Rosie”.  Sometimes even jumping on a trampoline or swinging helps with this but not as well as the actual spinning motion used in a functional way.

2. My child crashes into me and rolls all over the ground.

Your child most likely is seeking sensory input.  We wrestle, jump on the trampoline, and swing outside.  Two of my sons have sensory issues, so we are constantly satisfying their need to move and feel their bodies in motion.

Full body activities and/or heavy work help as well, such as carrying a laundry basket full of clothes, carrying the trash out, pushing a wagon full of toys or kids, or any activity that engages their entire body.  This works best for my 4 year-old.

My 3 ½ year old also likes to be squeezed.  He lays on the couch while I press down on him with a large pillow and/or throw pillows at him.  We call this “Pillow Squeezes” and “Rain of Pillows”; all my kids love this.  A lycra tunnel can also help with squeezes.  My mom made Charlie one for his birthday, and he uses it nearly every day.

3. My child walks on their toes.

My two sensory seekers walk on their toes.  You want to correct this as early as possible, because it can shorten the Achilles tendon causing damage later in life.  My 4 year-old son’s gate is wide as the toe walking has tightened his muscles so much that he often walks with his feet pointed out to compensate.  He also has a lot of leg pain.

With my 4 year-old, we gently touch his shoulder and say: “Heals down”.  He also has seen a Physical Therapist who gave us exercises to loosen his tight muscles.  I’m currently looking into purchasing special shoes that keep his heels down. 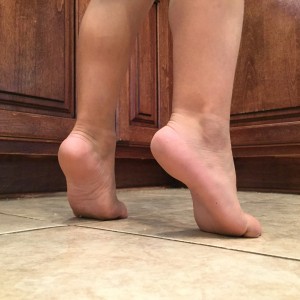 4. My child hits his head with his toys constantly.

Most likely your child is needing sensory input.  Charlie would hit his head with toy cars so fiercely that you could hear it.  It was awful.  He hasn’t done this in a very long time, thankfully.

I replaced the self-injurious behavior with very firm head rubs, while saying the words: “Head Rub”.  I wanted him to associate these words with my actions, so eventually he could request a head rub instead of hurting himself.  I also removed the car, and when his sensory needs were met, I modeled how to use the car properly.

5. My child cries when we turn left out of our tract or change driving routes.

I had no idea that when my son, at the age of 2, would scream violently when I turned left, he was upset because it wasn’t our usual way.  I think much of his car seat meltdowns were from his rigid behavior, causing chaos for him when I drove a new route.  Now that he is older, he yells and sometimes screams: “Want this way” while pointing right or left.

To reduce or eliminate this behavior, I always first acknowledge him and his need to turn left as well as explain where we are headed, calming saying: “I know you want to turn left, but we are going to pick up your brother from school and need to turn this way.”  I do this one time, and only one time.

Once Charlie started talking, I would again explain this only one time then ignore his continued protests.  He would continue to scream: “This way” over and over again while yelling and kicking.  It was hard, but I ignored the behavior.  I am happy now to say that he only says it one time, then I explain it, and we move on together.  This does still happen at almost every turn, but it’s manageable, for now.

6. My child lines up toys instead of playing with them and meltdowns if we don’t give him exactly 10 pretzels every time. 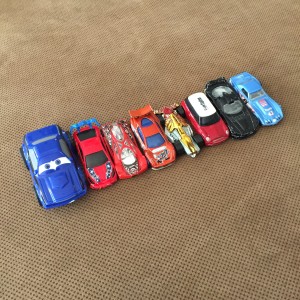 These are both rigid behaviors and can be hard to break, but persistence pays off.  Slowly but surely change how you present the pretzels, toys, or whatever your child is rigid about.

If your child lines up their toys or cars, come closely next to your child and slightly move a car.  Start slow and be prepared to be met with resistance.  You are gradually working towards showing your child how to properly play with the toys or cars instead of lining them up.  It is a long, step-by-step process, but we found much success doing it this way.  I will create a post that outlines these steps in the “How To” section.

In regards to the pretzels, it took us months to move away from the rigidity of needing exactly 10.  We first gave him 9 pretzels then changed it from there, making it fun and silly and sometimes even letting him pull the pretzels from the container.

It is HARD, but it will pay off.  I believe it is easier to deal with the meltdowns now in regards to challenging the rigid behaviors than to live a life full of strict guidelines and rigidity.  Remember, you are working hard to create a better, more manageable life for your child.